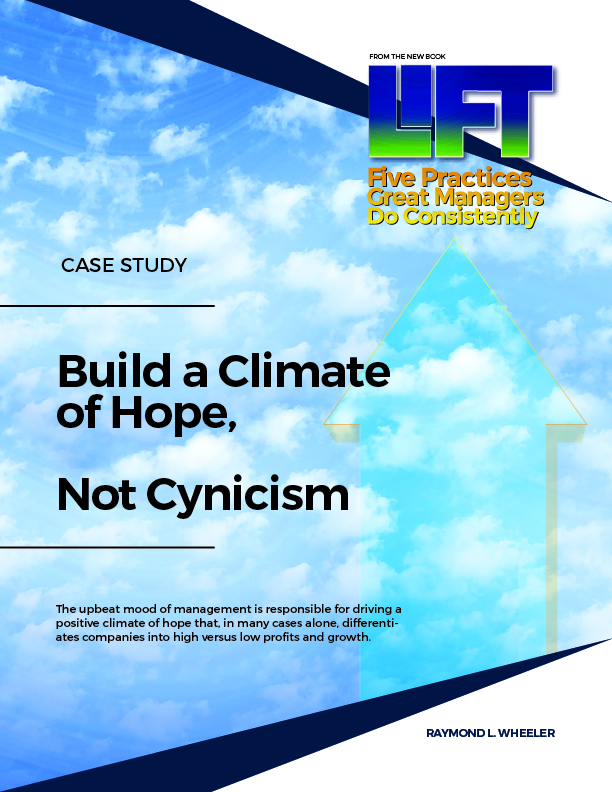 Case Study-Build a Climate of Hope, Not Cynicism

The upbeat mood of management is responsible for driving a positive climate of hope that, in many cases alone, differentiates companies into high versus low profits and growth.

An acute care hospital in a culturally diverse neighborhood saw an increase in turn over, absenteeism, and disintegrating morale among its department heads that corresponded to a steady drop in patient satisfaction scores.

An executive coach helped the executive team reassessed their emotional intelligence. They reimagined what healing felt like for the department heads relational wellbeing.  Armed with a new perspective, the executive team re-engaged ad hoc interaction with department heads that modeled emotionally intelligent leadership that rebuilt a belief in the future opportunity of the hospital in a culturally diverse neighborhood.

The new upbeat mood of the executive team led to a corresponding reduction in absenteeism, an increase in inter-department communication, improved patient satisfaction scores, and improved financial position.

A significant portion of how employees perceive their organization’s climate corresponds to the actions of one person: the manager. How employees feel about working at a company can account for nearly a third of business performance. Avoid a climate characterized by cynicism and build a climate of hope by:

•    Recognizing the power of climate and monitoring their mood

•    Leaning into the challenge of risk and learning

•    Believing in their team

Some managers pull groups together to produce extraordinary results.  Others exist in chaos of emotional excesses and deficiencies.  Why? What is the difference between the two? Through a series of interviews and observations, Dr. Ray Wheeler identified five practices that characterize the actions of remarkable managers who Lift performance and morale by consistently building ownership, working facts, knowing their people and themselves, managing activities, and building a climate of hope. In illustrating the components of the five practices of Lift with case studies and clear explanations, Ray offers a way forward for anyone looking to improve the way they manage their team.

LIFT is available on Amazon.com. Get your copy today!