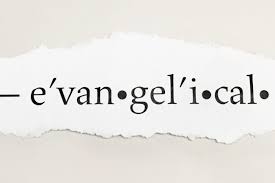 I have had a growing discomfort with the label “evangelical” particularly in the current environment of its more nationalistic, right leaning, personality cult here in the United States that issues propositions that overtly contradict the message of Jesus Christ. I have struggled with how closely the current western evangelical world reflects the world of German Christianity pre-World War II as described by Bonhoeffer. Bonhoeffer, and others more recently, decried the church’s inability to adequately address the abuses and distortions of hyper-nationalism he labeled rooted in static thinking.

“…static thinking is, theologically speaking, legalistic thinking….Where the worldly establishes itself as an autonomous sector, this denies the fact of the world’s being accepted in Christ, the grounding of the reality of the world in revelations reality, and there by the validity of the gospel for the whole world. The world is not perceived as reconciled by God in Christ but as a domain that is still completely subject to the demands of Christianity, or, in turn, as a sector that opposes its own law against the law of Christ. Where, on the other hand, what is Christian comes on the scene as an autonomous sector, the world is denied the community God has formed with it in Christ. A Christian law that condemns the law of the world is established here, and is led, unreconciled into battle against the world that God has reconciled to himself. As ever legalism flows into lawlessness, every nomism into antinomianism, every perfection into libertinism, So here as well. A world existing on its own, withdrawn from the law of Christ, falls prey to the severing of all bonds and to arbitrariness. A Christianity that withdraws from the world falls prey to unnaturalness, irrationality, triumphalism, and arbitrariness.”[1] (Emphasis mine.)

The so called culture wars engaged by evangelicalism has launched a battle against the world God has reconciled to God’s self with the result that evangelicals are often at a loss as to how to love their neighbor, demonstrate deliverance and healing, or walk with the wounded toward Christ because they are too busy decrying the world’s moral turpitude while ignoring their own moral impieties. There are times I have wanted to simply stop the evangelical merry go round and disembark to find a faith that exercises a practice of grace, intellectual reflection, repentance, and effective community engagement. I’m done with calls to support a particular political party or policy stands as authentication of my evangelical credentials, silence in the face of absurd parallelisms between our current president and biblical characters. I overtly reject the premise that recognizes the current president of the United States as the most Godly and biblical president I can expect to see in my life time.[2]

I ran across a book by Richard J. Mouw, former president of Fuller Theological Seminary (my alma mater) titled, Restless Faith: holding evangelical beliefs in a world of contested labels. Grand Rapids, MI: Brazos Press, 2019. Dr. Mouw asserts there are good reasons for keeping the label and not allowing rightist forces to co-opt it. My respect for Dr. Mouw’s scholarship and faith gave me pause to consider an alternative to leaving the evangelical fold and to work toward a revitalization of how we think. What follows is a summary of his main points.

However, these four distinguishing marks need to be qualified. Mouw sees the need for a common theological label that differentiates the essential distinguishing marks from other branches of Christianity. Diagnosing the root of the challenge of how evangelicalism has been co-opted by right wing political agendas results in several hypotheses. Mouw quotes New York Times columnist Ross Douthat who sees the evangelical community is breaking apart in part because of a gap between evangelical intellectuals and the millions who worship in evangelical churches. Douthat writes,

“It could be that the views and attitudes on display in the recent support for rightist causes has really been there all along, without much of an interest in the kinds of intellectual-theological matters that have preoccupied the elites. If so, the elites will eventually go off on their own, leaving behind an evangelicalism that is ‘less intellectual, more partisan, more racially segregated’ – a movement that is in reality ‘not all that greatly changed’ from what it has actually been in the past.”[3]

Mouw doubts Douthat’s scenario. I don’t agree per se with Douthat’s characterization of thoughtful evangelicals as elites but I do agree that anti-intellectual and isolationist influences in evangelicalism have often diluted our effectiveness and placed us on the wrong side of social justice issues and in contradiction of missio Dei. The proponents of a cultural interpretation of evangelicalism (evidenced in the so-called culture wars) has made segments of the evangelical world more like syncretism than contextualism here in the west.

With an implied nod to the potential of syncretism, Mouw notes that none of us can claim to rightly have a Christian worldview. Rather he moves from a noun to a gerund i.e., the practice of Christian “worldviewing”. He commends the process of reflection as the Word illumines our way. In a proper sense evangelicalism has been in a slow process of deliberate and implied deconstruction of its assumptions about church life, community engagement, appropriate lifestyles etc., in response to the work of the Holy Spirit.

Mouw amplifies Bebbington’s concise definition through his own history of development as an evangelical. The main points that follow emerge from a combination of chapters which center around his major themes. Mouw’s insights provide a much clearer demarcation for defining evangelical over against either fundamentalism (which he doesn’t overtly define) and right leaning political persuasions.

Mouw takes up the work of wresting the name, “evangelical” away from those who have co-opted it in order to amplify the best theological heritage it represents. He is committed in the process to the reformed moto of ecclesia reformata semper reformanda. He does not propose a passive stasis or nostalgia, but active pursuit of God in fullness and truth.

I see the deconstruction about church life, community engagement, and appropriate lifestyles mentioned by Mouw as emanating from two forces. The first is a syncretism with the context of the United States. In this direction the evangelical assumptions about itself have become more and more comfortable with its equivalence to American exceptionalism and nationalism.  The second is a deconstruction emanating from the work of the Holy Spirit challenging culture assumptions that draws the church into a clearer reflection of the ministry of Christ. The later is where I place the discussion of Mouw who himself reflects a maturing of perspective that results from his engagement with the word and the spirit of God.

I found a heuristic in Mouw’s book that gives me direction on how to retain a personal integrity in claiming to be evangelical and a basis on which to challenge the misuse of the word by those who co-opt “evangelical” for their political agenda. May God grant us the grace and love to be the church Jesus calls us to be in the world.

[4] Bonhoeffer, Dietrich. (2009) Ethics: Dietrich Bonhoeffer works volume 6. Clifford J. Green ed. Minneapolis, MN: Fortress Press. Bonhoeffer again makes a important contribution. The opposite of a critically engaged faith is any one of the inadequate options identified by Bonhoeffer that oppose formation: Reason which cannot grasp the abyss of holiness or the abyss of evil; Fanaticism which assumes that the power of evil can be faced with purity of the will and principle; Conscience which attempts to fend off the power of superior predicaments only to be torn apart and settle for an assuaged versus good conscience to keep from despairing; Personal freedom that values necessary action over untarnished conscience, fruitful compromise over barren principle, or radicalism over barren wisdom of a middle way consent to bad to avoid the worse unable to recognize that the worse they seek to avoid may be the better one; Private virtuousness that does good according to abilities but necessarily renounces public life in the self-deception necessary to remain lean from the stain of responsible action in the world. “In all that they do, what they fail to do will not let them rest.” (80)

[5] Miroslav Wolf and Matthew Coasmun. (2019) For the Life of the World: theology that makes a difference. Grand Rapids, MI: Brazos Press, 82.

[6] Miroslav Wolf and Matthew Croasmun. (2019) For the Life of the World: theology that makes a difference. Grand Rapids, MI: Brazos Press, 69. “The image of the home of God as an abiding relation between God and the world fits well with two great images bookend the Bible. Both are images of the creations’ wholeness and flourishing. …the verdant garden (Gen. 2:4-3:22)…the thriving (and verdant) city (Rev. 21:1-22:7).” This integration and the point of human flourishing as a result of relationship with God is a theme amplified by Wolf and Croasmun that illustrates integration and common grace.