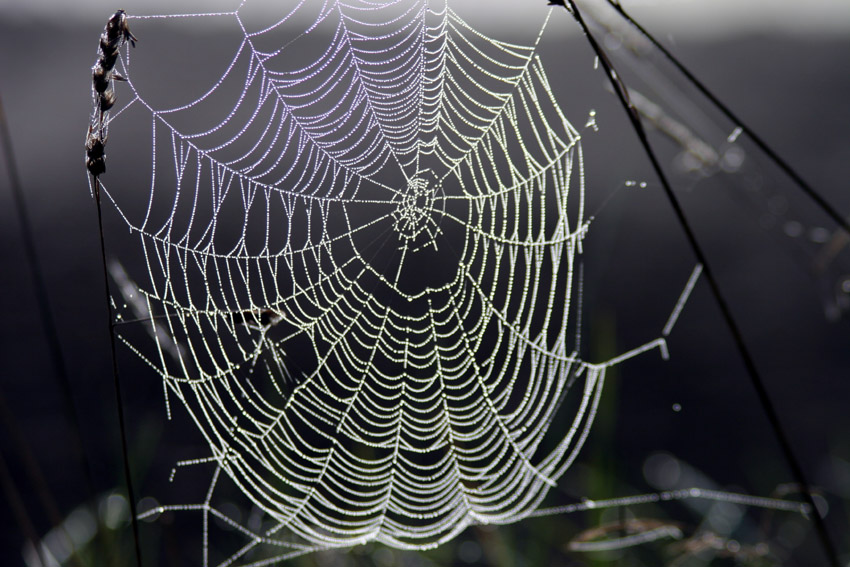 It is known in my family, who find it simultaneously comical and comforting, that I don’t tolerate spiders or their webs. I even have a special broom that allows me to circumnavigate the house outside and inside destroying the vestiges of arachnid existence. I don’t mind the existence of spiders in the woods around our home, but I do mind when they invade my space. If I see a spider, I immediately dispatch it to its heavenly home.

On one afternoon after I had washed the windows, I lay down on the couch with a cool drink to relish the beauty around me now made more visible by the clean windows. Our home has a 360-degree view and that means a lot of windows some of which are on the wall near the top of our vaulted ceiling.

Movement caught my eye in the highest window. There, in plain sight and apparent disregard for the work I had just completed in removing all webs prior to washing the windows, an orb spider was busy re-spinning its lunch ticket. I watched it work, a painstaking and exacting process and it started me thinking.

I routinely destroy webs and spiders routinely re-spin them. Yet, I have never heard a complaint by said spiders. Re-spinning damaged or destroyed webs is part of their process of survival – stuff happens. I thought about my own responses to setbacks, as losing a web is surely a setback for arachnid survival. I often expended far more emotional energy than is needed when I face setbacks. Rather than simply rebuilding my “web” I complain, bemoan my misfortune, lament the added workload, and on occasion engage in passionate “intercessory” prayer. My eight-legged friend simply does the work of re-spinning.

I have said this to you, so that in me you may have peace. In the world you face persecution, affliction, distress, pressure. But take courage; I have conquered the world! (John 16:33, Wheeler expanded NIV)

The fact of the matter is that affliction, distress, pressure, and even persecution, sabotage, and setbacks are a normal course. Jesus gives a frame of reference regarding distress that is: the perspective from which we assess life events determines (a) whether they can serve a positive formative purpose and (b) the degree to which we recognize the working of God who is given to contradicting injustice, hurt, despair, oppression, and the afflictions of the human condition.

In a spider’s world, Murphy was right. If anything can go wrong, it will. In our world, the same is true. In fact, I have determined a corollary to Murphy i.e., if its bad it can get worse. In light of this, perspective is important. Given the very real suffering, sabotage, setbacks, and even persecution we may face we are promised peace. Peace is that security or tranquility that is the foundation for flourishing that comes from the reality that the systemic roots of evil and corruption are already defeated in the resurrection of Jesus Christ from the dead. Jesus has overcome the systemic roots (the world in a systems sense). We are therefore called upon to engage behavior that contradicts the hurt of set-backs. I like the summary of womanist theologian Karen Baker-Fletcher;

The significance of Christ’s response to weapons of evil is not a passive bearing of it all, but is God’s profound “NO” to evil. In following Jesus, we participate in the divine “no” to evil and suffering. For these reasons, it makes sense to follow Jesus while also challenging an adulterous relationship with world power, greed, and violence.[1]

In watching that spider rebuild its web that day I realized it served as an eight-legged evangelist to me reminding me that things I see as a setback are not only predictable but powerful in that they serve to form and shape my development as a person who flourished in life not because I live in an artificial environment but because I have a sense of well-being and purpose that sees what God is up to even in the mundane and enjoys that fellowship with the Almighty that says “No” to evil and suffering and “Yes” to a flourishing and abundant life.