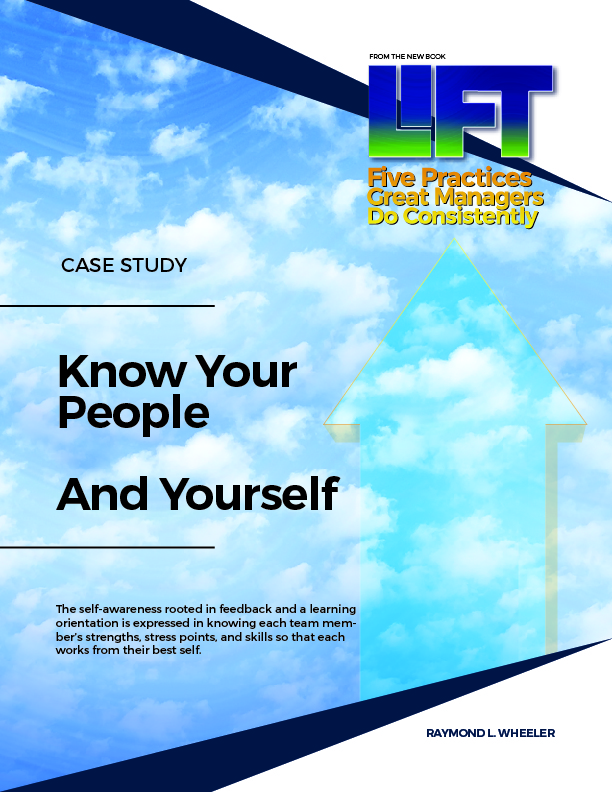 Case Study: Know Your People, And Yourself

The self-awareness rooted in feedback and a learning orientation is expressed in knowing each team member’s strengths, stress points, and skills so that each works from their best self.

The holding corporation appointed a new CEO to turn around a poorly performing hospital plagued with infighting, attrition, and poor physician/management relationships. The CEO had six months to accomplish the task. If he was unsuccessful, it meant the closure of the unit, a loss to the community, and the end of his career growth in that corporation.

Before arriving at his new assignment, the CEO reflected on the lessons he had learned at his last hospital assignment regarding his self-perception, team development, and how stress impacted the actions of his team. He pulled his new management team together and laid out the reality of what they faced. He asked them for input on what they needed from him. He described what he needed from them. They worked on a plan for change with clear assignments and accountability. He asked for a commitment from them and gave them his commitment. He reframed the challenge from a financial crisis to a mission crisis and called his team to work with purpose.

The CEO created a culture that admitted uncomfortable facts without incrimination. They rapidly adjusted their strategy as new challenges emerged. Because the CEO listened and took the time to know his team, they succeeded in making profitable changes, and they created a culture of high execution, mutual respect, and fun. The team worked with a sense of purpose that was greater than themselves, and they saw the impact they made on their community as a result.

Managers or leaders under pressure to produce immediate results often jump into the task at hand, thinking they portray confident leadership by giving orders and making intense demands or change. By spending time to know one’s team simultaneously to engaging a problematic task, the manager empathizes in a way that humanizes the challenge and learns the strengths and limitations of each team member. Knowing your people and yourself requires that you:

Some managers pull groups together to produce extraordinary results.  Others exist in chaos of emotional excesses and deficiencies.  Why? What is the difference between the two? Through a series of interviews and observations, Dr. Ray Wheeler identified five practices that characterize the actions of remarkable managers who Lift performance and morale by consistently building ownership, working facts, knowing their people and themselves, managing activities, and building a climate of hope. In illustrating the components of the five practices of Lift with case studies and clear explanations, Ray offers a way forward for anyone looking to improve the way they manage their team.

LIFT is available on Amazon.com. Get your copy today!